Immunoglobulin refers to animal protein with antibody activity. Mainly exists in plasma, but also in other body fluids, tissues and some secreted fluids. Most immunoglobulins in human plasma are present in gamma globulin (Î³-globulin). Immunoglobulins can be divided into five categories: IgG, IgA, IgM, IgD, and IgE.

Composed of two identical light chains and two identical heavy chains, it is an important class of immune effector molecules; proteins produced by lymphocytes of the immune system of higher animals can be transformed into antibodies by induction of antigens. Due to different structures, it can be divided into IgG, IgA, IgM, IgD, and IgE, most of which are gamma globulin. Soluble immunoglobulin exists in humoral and participates in humoral immunity; membrane immunoglobulin is a B lymphocyte antigen receptor.

The basic structure of the Ig molecule is composed of four peptide chains, that is, two light chains with the same molecular weight (L chain) and two heavy chains with the same molecular weight (H chain). The L chain and the H chain are connected by disulfide bonds to form a four-peptide chain molecule, a monomer called Ig molecule, which constitutes the basic structure of the immunoglobulin molecule. It is known that the five chains of IgG, IgA and IgD in the five immunoglobulins each have a variable region (VH) and three constant regions (CH1, CH2 and CH3), a total of four functional regions. The H chains of IgM and IgE each have a variable region (VH) and four constant regions (CH1, CH2, CH3, and CH4) totaling five functional regions. VL and VH are the sites that bind to the antigen. The basic structure of the monomer consists of a pair of L chains and a pair of H chains. There are only two sites for binding to the antigen, such as IgG, IgD, IgE, and serotype IgA; The two monomers connected by the J chain have four binding sites for antigen, such as secreted IgA (SIgA), so the affinity of SigA for antigen binding is higher than that of serotype IgA. The pentamer connects five monomers, such as IgM, by a J chain and a disulfide bond. The pentamer IgM should theoretically be 10 binding sites for antigen, but in fact, due to the steric hindrance of the stereo configuration, generally only 5 binding sites can be bound.

Both the H and L chains have variable regions. The near-N-terminal amino acid sequence of the same heavy chain and the same type of light chain varies greatly, and the amino acid sequence of other parts is relatively constant. According to this, the light chain and the heavy chain can be distinguished It is a variable region (V) and a constant region (C). VH and VI. The amino acid composition and arrangement order of the three regions are highly variable, and are called hypervariable regions (HVR) or complementarity determining regions (CDR), which are CDR1, CDR2 and CDR3, respectively. The amino acid composition and arrangement order of the regions outside the CDR are relatively difficult to change, and are called the framework region (FR). VH and VI. Each has 113 and 107 amino acid residues, constituting 4 FRs (FR1, FR2, FR3, and FR4, respectively) and 3 CDRs. Each amino acid in VH and VI- can be numbered, and some conservative amino acids have their fixed numbering positions. After comparing different sequences with numbered sequences, the amino acid numbers A, B, C are added at a certain position Etc., such as 27A, 27B, 27C, 106A, etc. The three CDRs of VH and VL together constitute the antigen binding site of Ig, recognize and bind antigen, and determine the specificity of antibody recognition.

The C regions of the heavy and light chains are called CH and CL, respectively, with different types (x or in) of CI. The length is basically the same. But the length of different types of IgCH varies, some include CHl ~ CH3, and some are CHl ~ CH4. In the same genus of organisms, the amino acid composition and arrangement order of the C region of the same class of Ig against different antigens are relatively constant, and their antigenicity is the same, but the V region is different. The C region is related to the effector function of antibodies, which can activate complement, mediate the crossing of the placenta and mucosal barrier, and bind to Fc receptors on the cell surface to mediate opsonization, ADCC, and type I hypersensitivity.

There is also a bendable area between the arms that extend the Ig molecule and the trunk (between CH1 and CH2), called the hinge area. This region is rich in proline, so it is easy to stretch and bend, and can change the distance between the two Y-shaped arms that bind to the antigen. The angle between the two arms can be changed from 0 to 90, which is conducive to the two arms to bind two at the same time. Different epitopes. Although IgD, IgG, and IgA have hinge regions, while IgM and IgE do not, this does not mean that they cannot be bent at all, and in fact, they are relatively flexible. The length of the hinge region and the order of amino acids of various antibodies are also different; human IgD has the largest stretchable distance, and the bending degree of IgG4 and two IgA is limited.

IgG, IgD, and IgE are all monomers, and IgA (SIgA) in the secretion is a dimer, and IgM is a pentamer. 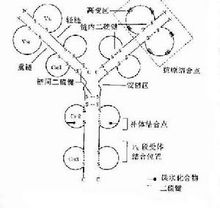 Schematic diagram of the basic structure of immunoglobulin molecules

The main component of human serum immunoglobulin is IgG, which accounts for 70-75% of the total immunoglobulin, has a molecular weight of about 150,000, and contains 2 to 3% of sugar. Although immunoglobulins are ever-changing, they all have similar structures. Antibody molecules are composed of two pairs of polypeptide chains of different lengths. The four chains form a Y-shaped basic structure (H2L2) through interchain disulfide bonds. The IgG molecule is composed of 4 peptide chains. The peptide chain with a molecular weight of 25,000 (23kD) is called the light chain (L chain), and the peptide chain with a molecular weight of 50,000 (50-60kD) is called the heavy chain (H chain). The light and heavy chains are connected by disulfide bonds (â€”Sâ€”Sâ€”). The role of immunoglobulin Human serum immunoglobulin IgG is the most durable and important antibody in the primary immune response, and it exists only in monomeric form. Most of the antibacterial, antitoxic and antiviral antibodies belong to IgG, which plays a major role in anti-infection, it can promote the phagocytosis (conditioning) of mononuclear macrophages, and neutralize the toxicity of bacterial toxins (neutralization) Toxin) and viral antigens combine to make the virus lose its ability to infect host cells (neutralize the virus). The age of IgG synthesis in the body is later than that of IgM, and synthesis begins at the third month after birth. It is the only Ig that can pass through the placenta and plays an important role in natural passive immunity. In addition, IgG also has the effects of regulating phagocytosis and binding to SPA. IgA is divided into serotypes and secretory types. Serotypes are mostly monomers and dimers. Secretory types are dimers and contain secretory tablets. Serotype IgA can mediate the role of opsonization and phagocytosis of ADCC; secretory IgA (SIgA) is the main component of the body's mucosal defense system, covering the surface of the nose, pharynx, trachea, intestine and bladder mucosa, it can inhibit the adhesion of microorganisms to the respiratory tract epithelium, Slowing down the propagation of viruses is an important barrier for the mucosa. It has antibody activity against certain viruses, bacteria and general antigens. It is the first line of defense against pathogens invading the body. Foreign antigens enter the respiratory tract or digestive tract. After the local immune system is stimulated, it can carry out an immune response itself without the involvement of the central immune system and produce secreted antibodies, namely SIgA. Studies have shown that the level of SigA in respiratory secretions directly affects the resistance of respiratory mucosa to pathogens, and the two are positively correlated. Colostrum contains secreted sIgA. IgA condensate can activate complement through the classical pathway. IgM is the first Ig produced by antigen stimulation to induce humoral immune response. IgM is not a cell, but it can bind complement and is mainly distributed in serum. Because IgM has a high binding value, it is a highly effective anti-biological antibody. Its bactericidal, bacteriolytic, phagocytosis and agglutination effects are 500-1000 times higher than IgG. IgM plays an important role in the body's early defense [2 ].